By using this site you agree to the use of cookies for analytics and personalised content.
Go to the content
Shortcut to footer
Search
Your favorites
To startpage

The municipality's main town Mjölby was called in old Swedish Mölloby, from mylna or mölna, which means mill. Mjölby was originally a mill village where the farmers came from near and far to grind their grain at Svartåns rapids and falls. That the area around Mjölby has been inhabited for a long time is evidenced by all the burial grounds, rune stones, stone circles and ancient castles.

In the 18th century, the number of mills grew in Mjölby, but with the great fire of 1771, all but two mills were destroyed. In 1828 there were eleven mills. In 1873 came the railway and in 1900 Mjölby became an urban community. In 1920 Mjölby got its city rights.

Today, Mjölby is a modern society with about 13,000 inhabitants and just over 28,000 in the entire municipality. The city has a strong business sector and a well-developed public and commercial service. In addition to the regular basic range of primary and secondary education, there is also a unique goldsmith line - the craft program Gold, a well-known hotel and restaurant program.

Mjölby has managed to keep the small town's good sides. There are plenty of parking options and most are free. Everything is close to the city center with an extensive range of shops and the large green areas contribute to Mjölby's friendly and pleasant environment. In 2020, the city of Mjölby celebrated its 100th anniversary.

Skänninges' heyday came during the second half of the 13th century and during the 14th century. The city emerged in the middle of Östergötland's richest agricultural area surrounded by noble estates and royal estates and became, through its central location, a hub for trade on the Östergötland plain. Several important political and ecclesiastical gatherings were added to the city with the 1248 church meeting as the most significant with the pope's envoy and Birger jarl as foreground figures.

Early in history, there were already several church institutions in the city. The All Saints Church, built in stone in the 13th century, had a wooden church as its predecessor, which was probably built in the 12th century. St. Martin's Church, which was probably a parish church from the beginning, also has its origins in the 11th century. It was later included in St. Ingrid's Dominican Convention. The Church of Our Lady, which we see today, was completed in 1300, but on the site it has been shown that there were churches in both the 1000s and 12th centuries. At the site where St. Olof's monastery was located, early Christian burials have been found, which indicates that there was an early church. At the beginning of the 13th century, Sweden's first hospital was built, later two Dominican monasteries were added, St. Olof's Monastery and Sweden's first female Dominican convent, St. Ingrid.

The place name Skänninge (Skeningiam 1178) is formed from Skena as in Skenaån (the Skena River). The river name naturally refers to the meandering river that flows through the city. The final name -inge refers to the inhabitants, skeningarna, ie "those who live by Skenaån". Today, Skänninge is a distinct wooden town with valuable buildings from the 18th and 19th centuries. It retains its unique urban environment that has been lost in so many other small towns. 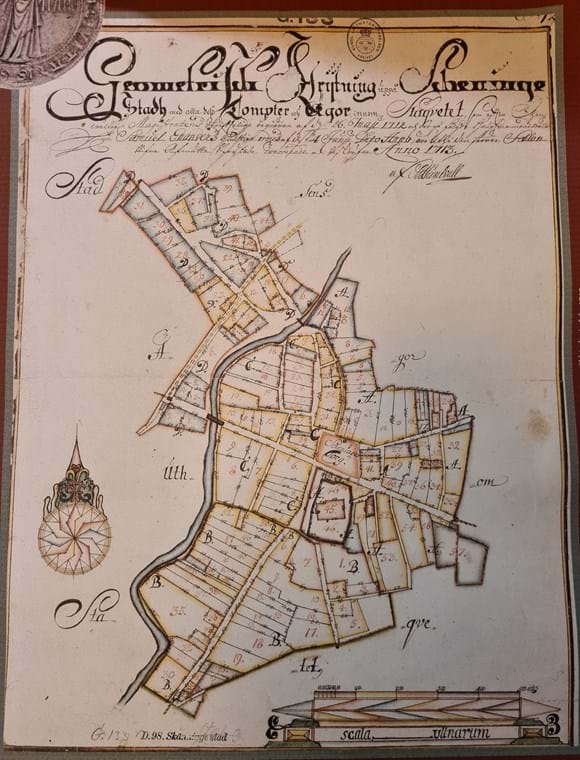 Several farms and crofts were located on the site we today call Mantorp, including Ubbarp, Rydja, Stenstorp, Olofstorp and Furuträd. Already early in history, important roads have passed the site and which later grew into "Riksettan" and now the E4.

When the railway was drawn between Linköping and Mjölby in 1873, it was part of the Eastern main line between Katrineholm and Nässjö, which was completed in 1874. Today, the section is part of what is called the Southern main line. The establishment of the railway through Mantorp attracted new residents to the town and which then began to grow.

During the 1950s, several parishes in the area merged and formed Vifolka municipality. Thanks to the favorable location by the main line and riksettan, several companies were established in the area.

An industrial foundation was behind the large company establishments in Mantorp which built both the Mantorp track in 1965 and the Mantorp Park Motorway in 1969.

Today, there is also a large shopping center Depot, Sweden's largest bag store Gunnes Väskor and Mantorp's glassworks. There are also a number of small industries with an emphasis on food handling, including bakeries, charcuterie industries and Sweden's largest bottling station for honey.

Väderstad, or Waederstadh as it is written, was mentioned for the first time in the 14th century. There are plenty of ancient monuments in the area that remind you that the area has been inhabited since the older Iron Age. This can be seen in the nature around Väderstad with stone strings that were mainly used to fence the animals from the crops. There are also remains from the Iron Age in burial grounds and rune stones. Until the mid-1960s, the main road ran from the south towards Stockholm, "riksettan", straight through Väderstad community. The most recent motorway construction (1999) conserved a stone string formation from the Stone Age that was moved to a place behind Väderstad's folk museum.

When Väderstad and Harstad's old churches were demolished and the parishes merged, the common church was built in Vallsberg's village in 1840. Here the new community now began to grow with post, shops and school. When the railway between Mjölby - Hästholmen was opened in 1910, housing construction also took off. Both "riksettan" and later the E4, as well as the railway, have been of crucial importance for Väderstad's development.

One of the municipality's largest industries, Väderstad AB, which manufactures agricultural machinery, began to emerge in the 1960s. The company is still under expansion.

The town is also home to Väderstads Centralkonditori, which receives up to 250,000 visitors a year. In 1970, Väderstad was incorporated with Mjölby municipality. About 50 villas were built and the town received a real boost in terms of population. Today, there are about 600 people living in the community.